See car on the road for scale

Last Sunday afternoon my day was rudely interrupted when the power went out. It was off for less than three hours but for that time I felt completely incapacitated, disconnected from the rest of the world and lost, not being able to do anything productive. Though logically I knew it was true these three hours demonstrated, more then all of the facts and figures I have learned, just how dependent we are on power to function on a most basic level.

This realization was quite timely, just after our visit to rural, Western Minnesota and one of the largest wind farming areas in the country. Minnesota is leading the country in wind power. Driving by farms of corn and beans we could see hundreds of wind turbines all around, it almost seemed like the cute baby .75MWs were slowly growing into larger adult 1.5MW turbines as we continued down the road. While impressive from a distance I was not prepared for the sheer magnitude of a wind turbine up close.

We were lucky enough to get to tour a 1.5MW turbine.  It towered over us at 360 feet tall including the 130 ft blades.  We were able to go inside where there is a computer that shows real time power production, RPMs for the blades and other information about the internal workings of the turbine.  This one turbine produces as much electricity as an oil well, far more on good days, and the power it produces alone pays for the repayment of the loan the farmer took out to build it. 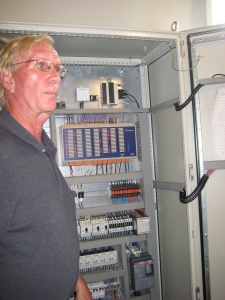 Computer inside the turbine

We asked the turbine’s owner more about what happens to the power that the turbine creates. He explained that, as most wind turbine owners do, he has an

individual agreement with Xcel which buys power the turbine produces at a bit over three cents a KW. He cannot use the power that the turbine produces directly, but is mandated by law to sell it directly to the grid. He then has to buy power for his house from his local power company at roughly eight cents a KW. This farmer has a gigantic wind turbine which he legally cannot use to power his own home.

This wind farmer told us how wind power’s biggest problem is creating a market for wind, but if we can produce power for far less then market price through wind power in South West Minnesota one would think that everyone would be building wind turbines! It seems to me that a key piece preventing this market from investing in wind is our rigid grid system, created to accommodate giant power companies, which forces local producers to sell power to the grid cheaply and buy it back for market price.

If we truly want to move towards a green economy with distributed energy production, where everyone can produce energy at home, our entire energy system needs an overhaul, we need to let people buy and sell power in an open market. This would allow people to produce their own power and make their homes more efficient, to put up wind turbines where the wind is good and solar panels in cities where appropriate. With a distributed energy approach people could create and sell power to the grid during peak load times and get top dollar for it, or use it to power their own homes during minimum load time, creating a more reliable and user friendly-grid. While this might not solve all of our power dependence problems, producing our own power would significantly reduce our load on the grid. Having solar panels on my roof might give me a few more options when the power goes out on a Sunday afternoon.