Performers at our community fundraiser.

Build It Up just hosted our first big community fundraiser on Saturday April 21st.  We were at the Next Door at the Acoustic Coffeehouse in downtown Johnson City.  The event had a kids fair, silent art auction and almost 12 hours of great live music!  It was a rainy, cold day and we were a little disappointed with the turnout.  Despite the fact that we did not raise as much money as we’d hoped, a few very cool connections were made and we hope some productive partnerships can be formed in the near future.  One of our performers was so excited that Build It Up is promoting local food and urban gardening in East Tennessee that he offered up some land for us to build a community garden on!  Community events–even if they don’t pull in oodles of money–are still great for meeting like minded people.  Building a vibrant, sustainable local food system is going to take many strong community partnerships and if we are not out there making noise and having fun, then those connections might be missed. 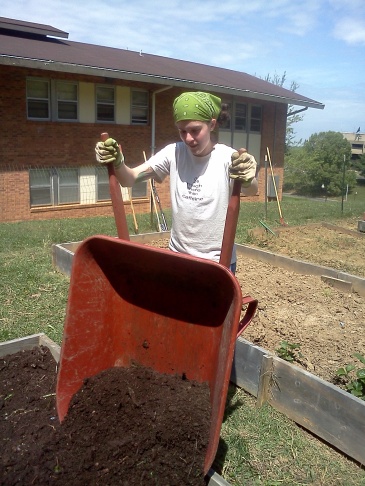 At our community gardens, we have had some very productive work days.  Rachel and Stephanie are organizing the work at the new garden at Shakti, a local community center for women in Johnson City.  Lexy has spearheaded the efforts at the community garden on the campus of ETSU.  Almost all of the plots at the ETSU garden have been claimed by students and faculty and we are hoping to involve these gardeners in a summer of learning and fun.  Build It Up is getting about 250 square feet of space for growing, and combined with the space at Shakti, we hope to have plenty of produce to feed ourselves, provide for our workshops, and distribute some to local soup kitchens.  The weather has become quite chilly and wet (not unusual for April) but we are hoping the sunshine will soon return.  Planting will get underway in early May, once all chance of frost has passed.

In return for helping to build their garden, Shakti has offered us free space for hosting our summer workshops.  We plan to conduct at least one workshop a month, and so far these include a workshop on food sovereignty in Appalachia, natural pest control, seed saving, food preservation, and water collection systems.  These workshops will be open to the greater community.  There will be a fee associated with each one, but it is our hope to fundraise enough for scholarships so that it reaches a wider audience than just those who can afford to pay.

Finally, we are busy planning what our Summer of Solutions program will do this summer.  On top of maintaining our gardens and organizing the workshops, we hope to hold another big fundraiser this summer and do some community outreach in an area of our city that has recently been classified as a food desert by the USDA.  We hope that our participants will come out of the summer with the skills needed to be a strong leader in the local food movement.

Participants will gain the skills to:
1. Grow their own food using sustainable techniques
2. Organize and teach skills building workshops
3. Organize and promote a big fundraising event
4. Do community outreach and surveys in lower income neighborhoods

If you like what you’ve just read, then friend us on facebook (www.facebook.com/BuildItUpETN) and let us know you want to get involved!