My name is Carey deVictoria-Michel. This summer, I was a participant in the Twin Cities Summer of Solutions and during this time my eyes were opened to all the amazing things that are happening in this city.  Through funding available to Summer of Solutions participants, I was able to create a position for myself at YEA Corps, a Minneapolis based non-profit that leads educational programs focused on entrepreneurship and sustainability. This is the first blog post in a series by the five Summer of Solutions alumni who will be building their own careers with support from Grand Aspirations in the coming year. 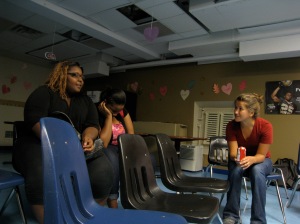 Me (r) talking to a student at the YEA Corps launch day at Unity Charter School.

My job with YEA Corps this year will be to mange a project at the YEA Corps program at the Minnesota Internship Center at the Unity Campus. Unity is a charter school located in North Minneapolis working with students who come from diverse backgrounds, in a neighborhood considered to be a food desert. YEA Corps and Minnesota Internship Center received a grant from Hennepin County to start an experiential learning program for environmental education in North Minneapolis. By the end of the year these kids will have built their own aquaponics systems, created their own business and marketing plan to sell fresh produce and fish, and have learned about sustainability and food systems. We had our big launch day with the students this past week.

Zach Robinson of YEA Corps presenting at the Launch Day

It was a bit nerve wrecking to arrive at Unity to present the introduction of the YEA Corps project to the students. We faced the challenge of engaging the students and getting them excited about growing food, aquaponics systems, and entrepreneurship, without losing their attention to friends, cell phones, and Takis chips. Despite the distractions of high school students, we were able to get them pumped up about the YEA agricultural business project. We did, of course, come prepared with fresh music, cool videos, Galactic Pizza (yum!) and an awesome presentation. Aquaponics is a system that produces fresh produce in garden beds that receive water and nutrients through integrated fish tanks, creating a dynamic agricultural ecosystem. Aquaponics is an emerging agriculture system, and by the end of the semester, these kids be on the cutting edge of the urban agriculture field. 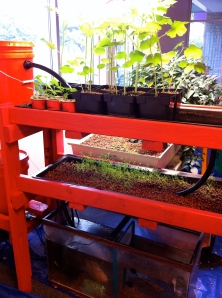 An aquaponics system at YEA Headquarters.

As if pizza and music were not enough, community figures came to the Launch Day event to converse with the students and support the project. The community members Annie Young, Michael Chaney, Kristy, and Jane Shey are all key figures in the environmental and urban agriculture movements in the Twin Cities. Annie Young is a community organizer and environmental advocate who I met through the Summer of Solutions, and we were lucky to have her speak at the event about environmental justice in the Twin Cities. Micheal Chaney of Project Sweetie Pie also shared his passion for urban agriculture with the students, emphasizing that youth must become actors and producers in our society, urging them to be active in projects such as these. 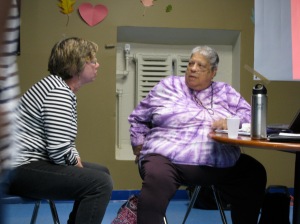 We were also lucky to host Kristy of Community Bees and Bikes, an organization based out of Minneapolis that educates youth about biking, agriculture, and bees in the city. Jane Shey, the director of Homegrown Minneapolis, showed her support for the students at our Launch Day as well. Homegrown operates as part of the City of Minneapolis to facilitate the growth of urban agriculture. It’s an initiative that started in 2008 that has made huge strides in changing policy to support urban agriculture in the city. 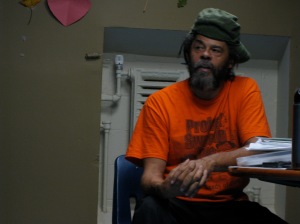 I started the day nervous and unsure, and I ended the day feeling energized and ready to launch this program with the students at Unity. The community figures at the Launch Day represented movements in urban agriculture, environmental justice, environmental education, and local governments coming together to create sustainable futures in Minneapolis. The students at Unity are going to be movers and shakers in this larger movement, and have support in creating their own sustainable future.  I think the school is called ‘Unity’ for a reason.