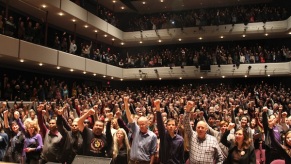 This past Friday night, environmentalist, author, and founder of 350.org Bill McKibben came to Minneapolis as part of his Do the Math tour through twenty-one cities across the country. His message? A call to action in response to his July 2012 article in Rolling Stones Magazine, “Global Warming’s Terrifying New Math.”

In his article, McKibben pieces together a stark picture of our present reality. To summarize, the fossil fuel industry has in its total known reserves five times the amount of coal, oil and gas we would need to burn in order to cause a global climate catastrophe. The numbers are fairly simple. Though not much else was decided at the Copenhagen Climate Summit in 2009, it was agreed that a 2ºC rise in global temperatures is the absolute highest that we can “safely” allow (see a breakdown of scenarios here). We have already raised the global temperature by 1°C. To raise it one more degree, we would need to emit 565 gigatons of carbon dioxide into the atmosphere. Sounds like a lot, but we already have 2,795 gigatons at our taking. So much for peak oil, right? 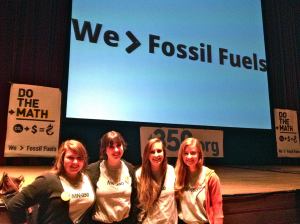 So what can we do about it? Obviously, we’ll need to learn how to consume less, either through our own ingenuity or by force of reality. Yet, while individual actions are an important part of shaping personal identities (allowing us to say with confidence, “Yes, I am that type of person,” and guiding us to act accordingly), far-reaching change at the rate we need it will take real political pressure where it counts.

Enter 350.org’s divestment campaign. Students, faculty and alumni are organizing across the country, demanding that their universities remove fossil fuel companies from their investment portfolios. This model has worked in the past: in the 1980s, students successfully pressured 155 universities in the United States to divest in companies that were actively supporting the Apartheid regime in South Africa. Their action quickly drew public attention, sparking protests far beyond the academic world.

That said, Do the Math wasn’t just another gloomy lecture meant to fill our heads with nervous questions. It’s time to quit the nail-biting and get excited. There’s work to be done and a strategy in place, and if you don’t know what to do, start by looking here.