After today we will miss John Hope Franklin, a legendary public servant, historian and a representative of equity and scholarship to the world. In his passing  he remains one of the most admired, relevant and influential historians of our time. Among his broad report Dr. Franklin is a James B. Duke Professor Emeritus of History, and was Professor of Legal History in the Law School at Duke University for nearly a decade.

Throughout his endeavors Dr. Franklin, who I never had a chance to meet though have admired throughout my formative years, has successfully married scholarship and public service with ease, character and grace.

In 1979 the President appointed him to the Advisory Commission on Public Diplomacy while continuing  his work on the National Council of the Humanities after his tenure by publishing many, many books and articles on U.S. southern histories and race. He has also served on the President’s Advisory Commission on Ambassadorial Appointments. Until recently, Professor Franklin had served as chairman of the advisory board for One America: The President’s Initiative on Race.

America’s solutioneers possess and continue to seek out role-models, but only very few of us seem to spend very much time sharing the role of our relationships with them. I was told once by a great man that “for the first time, we live in a society where our grandparents can hate their grandchildren for who they are.” Maybe spending more time with them, talking to them could change that.

I have been spending time reflecting on the Solutions for the South Conference that was held on March 21st and 22nd in the Graham Memorial Hall here in Chapel Hill, just nine miles down the road from where Professor Franklin taught thousands of students throughout a living history of crisis and fear. I don’t doubt that his classroom escaped that those fears. For law students he must have seemed like the most powerful man in the world whose words could lift a barn. For those students there was probably no greater an assurance than learning under a man who has spent more time in the Whitehouse in a day than they probably would in a lifetime. My classroom settings on the other hand were from 2001 forward tinged by anxiety over our shared future. Most of us have since then been confronted with by an unavoidable “what next?” “what now?” “why?” There seemed to be little that the ordinary person could do in my community. So the question often rose in class, “why bother?”

On Saturday the Roosevelt Institution got real about what we think are solutions  to today’s challenges. We have humbly begun to take steps forward and lay substantive groundwork for our generation’s deployment of new technologies, skills, and community infrastructures both before and after graduation. Alongside of us are other mentors and role models who have seen and lived through far more than we have in their times, but no-body sees more in a room of 40 students than they did on Saturday. 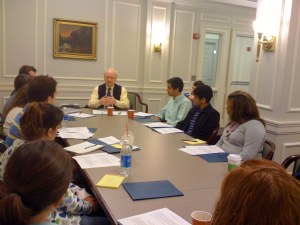 When Professors Hodding Carter III, Ferrel Guillory and Phillip Berke reinforced the 40 of us to pursue our policy and enterprise programs while running for local offices to guarantee the future for their great-grandchildren, I then realized that nobody is talking any more about the fate of a couple of generations, but about our society and this civilization– that we have control over our future and that each of us, those listening to and reading my story, will always have the power of decision. That is the most powerful thing there is. While some of you may have had other experiences, that’s a long way from the helplessness of the struck generation I knew in my peer community after 2001.

Recently the Roosevelt Institution here at UNC-CH left campus. We 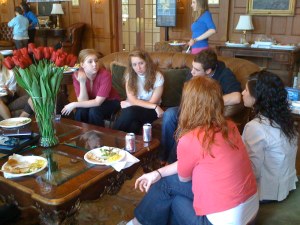 still hold meetings in our favorite cafes and in the damp basements of vacant buildings. We have to talk over the hum of boilers and radiators, but that’s not where the action is. The action is in communities across the Southeast. Ashley Barltett wasn’t able to make it to our conference from Georgia, but she and he friends are building policy around alleviating the least-well-off farmers in her state, in times of spurious growth as well as in times of slowdown, by getting them the information that they need to evaluate annual growing conditions. She’s active in her community and she’s acting on it with what she has. That’s what we need.

Each of these folks are getting their fingers dirty both on paper and within their communities and neighborhoods to get a just job done just right. It’s time we got started, dug our toes into the soil, and buckle-in for the tug-of-war this century. It’s Young people versus the odds, which come from a rich portion of history. The thing is that Young people come from a rich history too. I think that Professor John Hope Franklin knew and I think that’s what he wanted to tell us through his legacy and also in the lecture-hall. It comes to me as no surprise that people like Ashley Bartlett, working in communities across our backyards, are walking in Dr. Franklin’s shadow and others like him, some of whom are our teachers today. One day we might walk in his footsteps or even aspire to fill his shoes. On the other hand we, in search of role-models, find them among one other and our own. I’m pleased that, even in his passing, working together with role models like Professor Franklin beside us in spirit betters the odds, and even the outcome. In solidarity we discover learn and implement together. In living memory of John Hope Franklin.

This Post is in dedication to John Hope Franklin, his family, and legacy. You will be missed.