It’s been a busy month for Summer of Solutions Ithaca! The hot issue in upstate New York is hydrofracking, and January has been a crucial period for legislative decisions around fracking. As you may know, New York has had a tenuous moratorium for the last 4 years, though Governor Cuomo has nearly given the go-ahead several times. We’ve been fighting our hardest to make sure that doesn’t happen!

In December, the government released regulations for the drilling process — which seems pretty illegal because they haven’t completed the environmental impact study let alone a health impact study. Regardless, the regulations were released and the citizens of NYS responded accordingly. We had 30 days to comment on the regulations, and we threw ourselves into it. All of us working at Summer of Solutions organized a project called “Homework Against Fracking”, where in 24 hours, we collected over 150 handwritten comments from young people. The comments were incredibly heartfelt and moving. Here is one excerpt:

“I am 11 years old. Sometimes I have bad dreams about fracking … If the farms are contaminated, no more eating local. No more fresh strawberries, no more real milk.”

Delivering the Homework Against Fracking comments in Albany!

The end of the comment period coincided with Governor Cuomo’s State of the State address in Albany. On January 9, over 1500 people showed up to greet Governor Cuomo and show him what our priorities are for our State in the coming year. Chants of “Ban Fracking Now” echoed for hours. Our bus to Albany, one of four from Ithaca and eleven statewide, was full of

middle and high school students from three local schools. We practiced chants we knew with them and then asked them to brainstorm some chants. It was honestly the most inspiring part of the day. They came up with 15 chants–“Our sons and our daughters, say we must protect our waters!” They were powerhouse chanters during the rally.

We showed that young people are a powerful and important constituency in the fight against fracking. If we didn’t know that already, the same young people from the bus organized a large anti-fracking event in Ithaca. These 6th-10th graders had been working on it for 10 weeks! They had organized speakers–the 24 year old mayor of Ithaca, an anti-fracking organizer from Pennsylvania, and a 27 year-old local congressional candidate who had graduated from Cornell–a showing of the film “Dear Governor Cuomo”, and a series of workshops. Ren and Reed led one workshop around divestment, specifically group recruitment, SMART goals, and canvassing basics. It was a pretty emotional day, and we were all inspired to see the young leaders at work, especially since we had helped out with final logistics at their last meeting and experienced their excitement first hand. 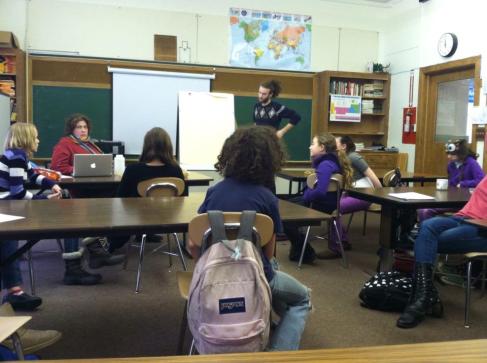 We’ve been plotting a transformational and unique summer, and we are so excited to let people know more about it, but for now it’s still under wraps! We’ll know what the Governor thinks of the total number of comments on the regulations — 204,000! — by February 13, so we are crossing our fingers until then. Happy January everyone!

1 thought on “Young People in New York Take on Albany!”