Summer of Solutions Ithaca is seizing what was once considered to be unimaginable and inaccessible in our time. Reminder, with the histories of revolutions, thus, the ability to see ourselves in mirrors, our generation is doing the imaginable and accessible. This summer, Ithaca will be multiplying this effort for a Sustainable Future. As a generation, we are proving to confront our courage by creating spaces where fear is molded into endurance. In case you are wondering, a Sustainable future is a solution already. Now, what do we do?

As you may have heard, New York State announced yesterday afternoon that the February deadlines will be missed, the reason given being that more time is necessary for the state’s health review. This is a magnificent opportunity to move forward with action and reaching out to more communities to ensure our voices are heard. Today enriches our generations goal by making evident that action asks and promises solution. This morning marks the day when Governor Cuomo was due to release the SGEIS and in doing so move ahead with fracking. Today, communities are sending appreciations to everyone’s courageous commitments and amazing work; we are celebrating all efforts. Though, we are aware of this journeys extended commitment, we are in agreements that this is also a beginning to a beautiful solution. END_OF_DOCUMENT_TOKEN_TO_BE_REPLACED

It’s been a busy month for Summer of Solutions Ithaca! The hot issue in upstate New York is hydrofracking, and January has been a crucial period for legislative decisions around fracking. As you may know, New York has had a tenuous moratorium for the last 4 years, though Governor Cuomo has nearly given the go-ahead several times. We’ve been fighting our hardest to make sure that doesn’t happen!

END_OF_DOCUMENT_TOKEN_TO_BE_REPLACED

We’ve been playing around with this idea for more than a year, but we are finally on the ground organizing a Summer of Solutions Ithaca! We are thrilled to engage with the community in a new way and it could not come at a more perfect time — Ithaca is undergoing a transformation and our vision of a sustainable future for the area seems closer than ever.

A little background first: Ithaca is a progressive city situated in rural upstate New York and home to two fantastic universities, Cornell and Ithaca College. We have a history of enacting the world we would like to live in. For instance, Ithacans successfully kept Wal-Mart at bay from 1992 until 2005, concentrating on small business development aided by our own currency, “Ithaca Hours”, which are to be used as payment for hours of work. Ithaca and Tompkins County are replete with organic farms, which are often youth led. We’ve seen widespread energy efficiency campaigns and the development of numerous local renewable energy sources. Last year, we elected a 24-year-old Cornell graduate as mayor of the city. Ithaca is home to countless celebrations commemorating this special, beautiful place we call home.

We recognize that Ithaca still has problems. We haven’t transitioned substantially to renewable energy sources. We do not yet have a viable local food system. Race, class and gender injustice persist. Many residents are painfully aware of the natural gas industry’s intention to drill in the Marcellus Shale that lies under Ithaca and surrounding counties in New York. 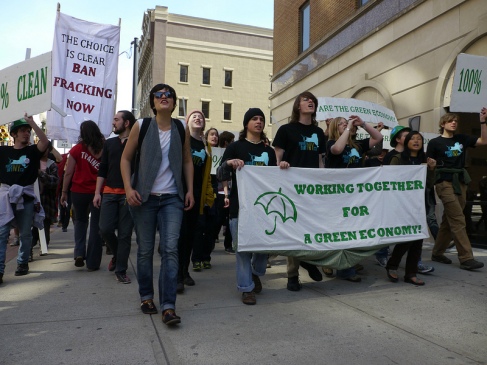 END_OF_DOCUMENT_TOKEN_TO_BE_REPLACED

1. Someone who makes it happen 2. Someone who uses creativity and innovation to solve broad problems of climate change, the economic crisis, and environmental injustice. 3. A dynamic individual capable of things far greater than one might think. 4. You.