Skip to primary content
By Kate Johnson of the Iowa City, Iowa program.
This summer must have big plans for something fun in the fall, because it sure is in a hurry to get there! It has been a whirlwind of a few months here at Summer of Solutions in Iowa City, and we’ve been making the most of it in the ‘Sustainable Art’ group under the direction of Nick Gerken.  Though we have been sparsely populated, we’ve had some great assistance from our friends in ‘Our Power’ and ‘Iowa City Roots’.  With whoever we could grab, we have traveled to camps all summer, working on crafts with kids and talking to them about the environment.
These camps include Taproot, Pheasant Ridge, and two Wildlife camps (Hawk and Fox).  At Pheasant Ridge, we had the same group of kids that all live in the same neighborhood every Wednesday.  We did many projects with them and got to spend a lot of time with them.  Some of our crafts included weaving mats, pinwheels, and birdhouses.  We really enjoyed our time there, which we wrapped up July 31 by going to a nearby park after making parachute toys with plastic bags.  It brings a smile to my face when I think of some of the things our Pheasant Ridge kids talked to us about, even though we sometimes struggled to keep them on task. 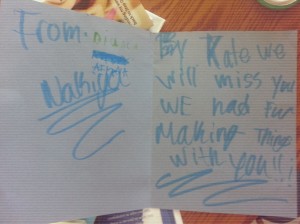 One of our other camps was Taproot, and it was my personal favorite.  They bring a very laid-back approach to their time around the kids.  It was a different group each week, so we could do repeat projects.  We started the days by talking about the three R’s (reduce, reuse, and recycle) and the kids proved themselves to be quite knowledgeable! For the majority of our time there, we made notebooks out of old books and recycled paper.  They impressed me with how well they turned out, and some of the kids had some great plans for what they were going to use their notebooks for.  Not to mention their plans for how the world should be run!  They were very insightful and fun to listen to every week.  Besides the notebooks, we spent the end of our time there making paper and they got to find leaves and flowers to press into it.  It turned out really well and we had fun designs and shapes of paper as our final product!  Among our ending results were a Pac Man and a ghost paper to go with it.

Our other camps, Fox and Hawk, generally had a pretty large turnout.  We spent our time there on Tuesdays and Thursdays making notebooks with one exception.  For one day we had an older group that were probably going into 6th grade.  We made kites out of sticks and newspaper on one of the few rainy days we had.  Although it wasn’t really a great day for kites, we were successful in the creation and the kids got to take them home to use on a nicer day.  Overall, these camps went really well and we had some great help from the counselors there.  We also occasionally brought some backup from our other groups.
The camps were all a blast, and I really realized how much fun the kiddos can be!  Outside of our time with them, we were usually out scavenging around at a recycling center for some materials or looking around at secondhand shops for what we needed.  We came across some interesting reading material during our searches for notebook covers, which we were constantly on the lookout for.  My personal favorite was a stack of children’s books in Korean, which were hugely instrumental for a month of notebooks.  The highlight of those may have been when we found a young girl at a camp who informed us she could read them or maybe when we framed pages of them and sold them at the Trivia Night we held at the Unitarian Universalist Society of Iowa City.
We certainly had some great adventures in ‘Sustainable Art’ and I am despondent when I think that the program will likely not return for next summer.  However, we are making sure it goes out with a bang.  As we wrap up the summer at camps, we still have work to do! We will be tagging along with the other groups and we still have our window painting project to work on.  All in all we have experienced a lot of success this summer getting through to children about how they can help out and I think they are going to turn out to be some really great people that just might save the world!