I’ve been spending a good part of the last five years imagining, developing, and implementing an energy cooperative, Cooperative Energy Futures, that will help Twin Cities communities take our energy economy into our own hands. For months now, I’ve been waiting eagerly for the final step in a series of projects that will allow us to hire a full-time staff person and start scaling up. I’ve been excited to announce our success to the world. And I’m still waiting.

Making a successful, financially self-sustaining venture is hard, even when the basic economic seem self-evident. Basic investments in energy efficiency are no-brainer deals, a few thousand invested now can save tens of thousands of dollars in energy costs over the coming decades, but it’s still hard for most people to afford the upfront cost. Even more importantly, the current process of delivering efficiency programs hasn’t made the transition from knowledge to action click for most folks – nationwide, an energy audit program is considered successful if 5% of the people who receive audits act on the recommendations. While it is clear that over $200  billion/year in potential energy savings is sitting untapped in United States communities, it’s nearly impossible to get at it.

In 2007, I started researching this challenge and learning home energy system science. In 2008, I helped convene a team of youth leaders and community experts to start evaluating what to do about it. In 2009, we incorporated Cooperative Energy Futures as a 308B Minnesota cooperative, a member-owned business. 2009-2010, we worked to develop our outreach strategy, educational approach, and network of community groups and energy service providers, and in 2011, we started launching our programs in full. We coordinated a series of workshops with a local neighborhood organization, training 30 residents, many of them renters and Spanish speakers, in energy conservation practices. We launched an insulation bulk buying program in late 2011 into Spring 2012, insulating 7 homes in our neighborhood. We launched a solar bulk buying program in summer and Fall 2012, securing 24 letters if intent from community residents to install solar (a total of 83kW) on their homes, pending Xcel Energy rebates. And we piloted a series of three commercial solar arrays financed by an equity investor, a first step towards community solar. As we closed up 2012, Cooperative Energy Futures was positioned to take it to the next level. END_OF_DOCUMENT_TOKEN_TO_BE_REPLACED

Hello!  My name is Shoshana Blank.  I went to St. Olaf College and participated in the Summer of Solutions in 2009.  I joined SoS because I wanted to get involved in the Twin Cities community with students from other colleges. Also, I was so passionate about trying to create solutions to climate change, I knew from the title of the program that I wanted to be a part of it. I think that I found out about the program through an email from the Environmental Coalition at St. Olaf. 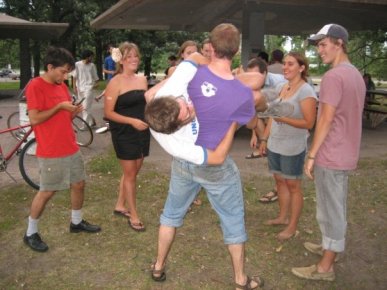 Even as young college students, we were able to do some big things in Summer of Solutions-Twin Cities because we were well organized. We could offer solutions to community members and be taken seriously because we had a plan of action and materials to back us up. I am specifically thinking about Cooperative Energy Futures, with structured meetings, a nice website, and a good business model.  I have so many good memories of my time with SoS, and I particularly love my memories from the potlucks we would have, at least once a week. It was such a good way to create community! END_OF_DOCUMENT_TOKEN_TO_BE_REPLACED

Hi All! I’m Emily Stiever, a native of Minnetonka, MN.  I was part of the inaugural batch of Solutionaries at Macalester during the summer of 2008. As I think back now, it’s difficult to remember exactly how I stumbled across the awesome group of people that morphed into Summer of Solutions (SoS). I think I had just come back from studying abroad in Nicaragua and I heard about the first January Gathering (in 2008). I have a vague recollection of showing up for a meeting at Macaleter’s Eco House over winter break and (since I got the time wrong) everyone was still sleeping. But once we got going, the January Gathering was really interesting and I was on board for spending the summer at Macalester and working on a number of the projects we’d dreamed up.

My experiences in SoS
One of my favorite experiences was riding back from a meeting at the Ford plant one evening. We’d just come from having a great discussion about ARISE (The Alliance to Re-Industrialize for a Sustainable Economy), “a coalition of local stakeholders, advocacy groups, and students seeking to create a sustainable redevelopment plan for the closed Ford factory in Highland Park, St. Paul.”  (The Twin Cities SoS program will once again be working with ARISE this summer!)  It was warm, and we all biked quietly home along the river trail on the Mississippi. It was one of the first times where I could see what my life could look like in the future: the ability to work on social issues that I cared about and to live sustainably in community with people who shared a similar passion. SoS helped me translate a general feeling of, “it would be cool to work on these issues at some point in my life” to a much more tangible, “this is how my life could look now.” The experience helped me clarify what I am looking for, both in my professional life and how I want to live personally, and has guided me as I’ve sought out living arrangements and jobs in recent years.

The other big take-away from my experience with SoS was the need to ground my activism and social justice work in extensive background knowledge about the issues. Throughout my summer in SoS, I learned a lot about climate change and renewable energy. Timothy, one of the program leaders, taught an ExCo (Experimental Community Education) class on climate, we met with multiple speakers, got into the nitty-gritty details of how to implement an energy efficiency program with Cooperative Energy Futures, and I borrowed a couple of great books from others in the program. I learned a lot of information that summer and I am surprised even now how often I use that technical and philosophical information even today. END_OF_DOCUMENT_TOKEN_TO_BE_REPLACED

As a born and bred Minnesotan, there is nothing better than coming home to Minneapolis, especially in winter. I love the winter wonderland Minneapolis is transformed into aftera huge snowfall. However, as much as I have enjoyed the snow, relaxation, and copious amounts of tea that come with being home for winter break, I keep thinking about how excited I am for Summer of Solutions Twin Cities 2013.

END_OF_DOCUMENT_TOKEN_TO_BE_REPLACED

I came to environmental issues initially from what seems to me to be a very middle class standpoint. My family had always been frugal, adverse to waste, etc., but these were choices that we made from some sense of social responsibility and personal financial responsibility, not absolute necessity. Moving my things out of my dorm room after my first year of college, I realized how much arbitrary stuff I’d kept throughout the year because of my socialized (and possibly genetic?) aversion to throwing things away. But this also meant that I had accumulated plenty of stuff, which made me think about the fact that despite the fact my family and I may have opted to not live excessively, we never went without, and certainly have always had small luxuries.

Therefore, as I gradually came to engagement in environmental issues growing up, I faced what I feel is, at least in my experience, a somewhat common paradigm that “doing stuff that’s good for the environment” means sacrifice. However, I always had this idea – that always felt vaguely idealistic due to current well-entrenched systems – that it shouldn’t mean sacrifice, that there were common sense ways, for example that more localized food production should be able to be environmentally sustainable and build local economies. However, I never felt particularly empowered to be able to make this happen. 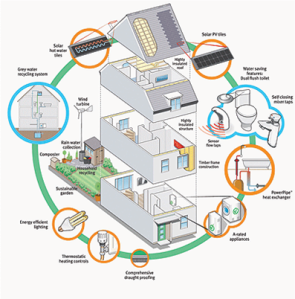 My thoughts in the last few months about Cooperative Energy Futures (CEF) have been gradually informing this idea, and tonight Timothy told his story of growing up (which I don’t really want to delve into here because I feel it’s still his story to tell) and I felt like the way in which I perceived his observations and experiences in a way complemented mine. To describe what I took from his story tonight, I’m going to go with something else I’ve heard Timothy say, over a month ago: “Let’s see lack as an asset.” I see this as a way that can (maybe in different ways depending on background, but maybe not, I don’t know) engage people from many class backgrounds (both the “haves” and “have-nots”, let’s say) in ventures that are both environmentally and economically sustainable.

The model being tested by CEF understandably seems unusual: capitalizing energy efficiency can also be described as creating something out of less, which runs opposite to most modern notions about wealth creation. While this is not an entirely new concept (see the ’70s cookbook, More With Less), carrying it out on any scale and with distinct entrepreneurial intent is definitely not a widely-thought-about idea, but it has lots of opportunity as we’re getting to the point at which continued excess is seeming unfeasible. However, less excess doesn’t mean the end of “business.”

Tonight I was told that CEF has been described as “a different kind of more,” which I see as very well capturing what the future will look like in a myriad of sectors. This is a different type of business plan, and it allocates value differently in some ways, but it’s still a business plan. Such a business can still create value and support people.

[Note: Our community conversation I reference was under the understanding of confidentiality, and I got Timothy’s permission to reference him and his comments.]

Note: This post cross-posted from Discovering Solutions by Christina Getaz.

1. Someone who makes it happen 2. Someone who uses creativity and innovation to solve broad problems of climate change, the economic crisis, and environmental injustice. 3. A dynamic individual capable of things far greater than one might think. 4. You.